So Long, See You Tomorrow by William Maxwell

Yesterday, my sons and I picked strawberries out of Mr. Rhett King’s strawberry field. TC, my eldest, asked, “Mama, why do they call them strawberries?”

“You’d probably have to go all the way back to the eighties to figure that one out,” he said. 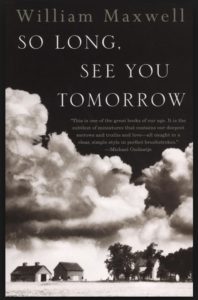 So Long, See You Tomorrow published in 1980, according to my seven-year-old, an eternity ago, the beginning of time. My writing partner, Bren McClain, author of One Good Mama Bone, suggested I read this book, primarily because the novel I’m working on now is a first-person narrative. First person is something I told myself I would never attempt. I swore to God I would never write a novel in first person, but stories dictate how they are told, and the writer must abide.

Bottom line, first person is hard. Bren suggested Maxwell’s novel because she admired the flexibility and elasticity of the first-person narrative. I think John Updike said a similar thing when he blurbed, “What a lovely book, utterly unlike any other in shape I have ever read.”

The novel is described as autobiographical metafiction, which basically means it reads like both a memoir and a work of fiction. In the storytelling, Maxwell fragments timelines, dips into third person, and even tells some of the story from the perspective of a dog, all within a first-person narrative sweep. Its construction, and as Bren says, its elasticity, is something to study.

So Long, See You Tomorrow won the 1982 National Book Award and was a finalist for the 1981 Pulitzer Prize. It’s a story about murder, the destructive passion of parents, childhood friendships, and how adolescent deeds can haunt you forever. . . . unless of course, you are like Maxwell and write a novel to make amends.

And for those of you stumped by my son’s question, here’s what the Old Farmer’s Almanac has to say about why they are called strawberries: https://www.almanac.com/fact/why-are-strawberries-called-strawberriesr-historians-arent