The Toad and the Jaguar by Ralph Metzner, PhD with Forwards by Stanislav Grof, MD and Charles Grob, MD

I came by this book driving to Nashville, GA for Aunt Carol’s funeral. She was killed in a car crash. In a split second. Just like that, we’re all taught to measure time.

The boys were in the backseat, still in their pajamas, arguing over who was the most powerful. I was on my fifth cup of coffee and in a trance. I might’ve felt different if Aunt Carol had been sick for a year. Why does it matter to us so much how we die?

About an hour into the trip, I decide to listen to a Tim Ferris podcast titled: Stan Grof, Lessons from ~4500 LSD Sessions and Beyond (#347). 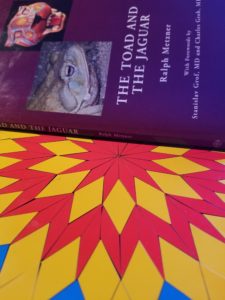 I can’t explain what my mind felt like listening to Tim Ferris and Stanislav Grof talk about psychoanalysis, psychedelics, holotropic states of consciousness, and what humanity needs most to overcome division and destruction, other than it exploded into a highly peaceful and creative state. I started writing on my forearm.

There were many books referenced in the discussion between Tim and Stan, one being, The Toad and the Jaguar. It’s a monograph of psychotherapist, Ralph Metzner’s, experiences and observations with Bufo alvarius (Sonoran Desert Toad) and 5-methoxy-dimethyltryptamine.

In a previous life, I was a scientist. At one point, I aspired for a Ph.D. in Environmental Biotechnology. Three months working in a clean lab cured me of that fantasy real quick. But, the more I studied evolution, the more I studied hydrogen-carbon bonds, although I couldn’t explain it, the more and more I was convinced of a divine and highly intelligent creator.

Ralph Metzner and fellow psychonauts like Stan Grof and Charles Grob are also convinced. Below is proof on page 2 of The Toad and the Jaguar’s forward.

“It is remarkable that the human central nervous system possesses such exquisite sensitivity to the effects of psychedelics. With the prototype synthetic hallucinogen, lysergic acid diethylamide (LSD), receptivity is on the order of micrograms, an astonishingly miniscule quantity. With other psychedelic compounds, including psilocybin, mescaline, and the tryptamines, while they do not possess such micro dose potency, their effects nevertheless induce profoundly altered states of consciousness that open the potential for life transformative experiences. Valued as sacraments of the highest order by the native peoples, their emergency into the turmoil and challenge of modern civilization demand that they be regarded with the greatest respect. We may also pause to reflect on the ontological significance of the human central nervous system, evolving from the earliest life forms on the planet to develop such remarkable and exquisite receptivity to so highly unusual a class of psychoactive compounds. It has become clear that the human brain has in a sense been programmed to respond to these plants of the Gods, as the great pioneers Schultes and Hofmann would put it. It is up to us, the inheritors of all the traditions and peoples that have passed from the earth, to make sense and learn how to optimally utilize these divine gifts.” – Charles Grob, MD

I can’t explain why this book came to me on the day we would lay Aunt Carol’s body to rest. I can’t explain how things suddenly come crashing into us on our collective search for the truth.