The Wilds by Julia Elliott

I discovered Julia Elliott in bed. It was late, the winter of 2015, and I was on a quest to find the end of the internet. My search landed me on a book review in the New York Times. ‘The New and Improved Romie Futch’ by Julia Elliott. Beneath the headline sat a photograph of the author, a haunted blue-eyed woman wearing a vintage shirt and blue jeans. She sat Indian style in a tangle of weeds and clover, clutching a chicken. The attraction was instant. She was a weirdo. 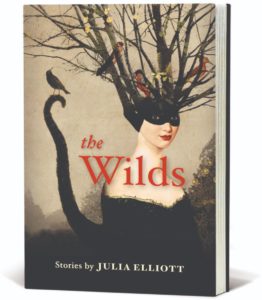 ‘The New and Improved Romie Futch’ was my favorite novel of 2016. It is the novel I recommend most, even if I get the sense you don’t like strange fiction.

Elliott’s story collection, ‘The Wilds’, is no different. It is a favorite. Many have tried to describe this collection with words like:  fizzy, imaginative, haunting, hilarious, eerie, magical, shocking, strange, savant. Kate Bernheimer says Elliott’s stories are endangered species. George Singleton says Elliott’s stories are stories in which to bathe oneself. I’d like to see George take a bubble bath with Brunell Hair’s evangelizing Meemaw or with a pack of Elliott’s feral, piss-squirting dogs. All I can say is Julia Elliott is one of my favorite American contemporary writers.

Four years later, after the internet discovery of Elliott, I get to share the stage with her, Mildred Barya, and Lindsey Drager at the Deckle Edge Literary Festival March 23, 2019 where we will discuss this:

Border Rovers: Women Fabulists Writing in the South
Over the past few decades, writers have begun to blur the boundary between “literary” and “genre,” challenging the primacy of “realism” with innovative forms of fabulism. Today, a rich array of women writers use fantasy, fables, fairy tales, horror, and sci-fi tropes to voice complex aspects of gender, sexuality, class, and race. This panel will explore ways that contemporary female writers living in the South invent radical new forms of lyricism and storytelling to contend with the complexities of identity in an increasingly interconnected world.

I reckon I’m a weirdo, too.